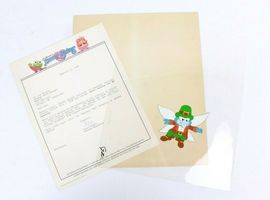 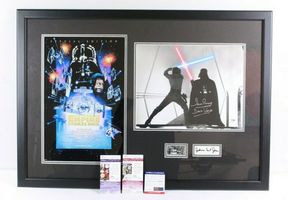 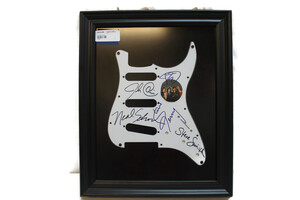 This item has been gently used and there is light wear reflecting this. All wear is cosmetic only.

ITEM:
*Original Jim Henson Muppet Baby Cell Baby Gonzo with WXXV-TV MS Letter 1989
FEATURES:
*Original Jim Henson Muppet Baby Cell Baby Gonzo
*Cell is from Season 5 Episode 3
*Episode Title: "The Pig Who Would Be Queen"
*Episode Plot: The babies create a picture box fairy tale.
*Episode was originally aired: September 24, 1988
*On the side of the cell, G-2 is written in sharpie
*Cell comes with original letter to Mr. Joe Brister, the general sales manager for WXXV-TV, a TV station in Gulfport, MS 39505-2500. The letter was written to Mr. Brister on February 21, 1989. The letter is written on original Muppet Baby stationary.

*The letter reads as follows: "Dear Joe: Season-to-date, MUPPET BABIES continues to dominate Saturday morning ratings with a 12.9 kid rating, still holding the #2 position. While you're waiting for the premiere on your station, we thought you would enjoy a special gift. Jim Henson was kind enough to give us original artwork form the series, so you can enjoy another 'original' from Claster Television. Only 5,016 hours until the fabulous Fall Premiere of MUPPET BABIES! Sincerely, Peggy Powell Account Executive"

*Only includes items shown in pictures.
CONDITION:
*Beautiful vintage original baby Gonzo cell from the 1980s hit TV show "Muppet Babies." The accompanying letter was written to the general sales manager of WXXV-TV, a TV station in Gulfport, Mississippi. The letter is written on beautiful "Muppet Baby" stationary, that reflect the bright vibrant colors used in the show. The cell is 12 3/8" x 10 1/2" and features baby Gonzo in costume for the season 5 episode "The Pig Wh

*Only includes items shown in pictures.
CONDITION:
*Three legendary signatures from the cast of one of the all time greatest film franchises. The epic scene between Luke Skywalker and Darth Vader signed by the epic David Prowse. The photo is 13" x 11" and has a beautiful signature by the physical of Darth Vader form himself. Along the bottom of the large black and white photo, are the autographs of Mark Hamill and James Earl Jones. All three autographs come with certificates of authenticity. Professionally framed at Hobby Lobby with gorgeous and expensive matting, this collection of pictures and autographs make the perfect statement piece. There is some light wear on the frame from being displayed. All wear is cosmetic only. On the corners of the frame, there are some small nicks. On the plexiglass and frame, there are some hair thin scratches. All scratches are cosmetic only. Please see picture. This is an epic trifecta of movie history. Don't miss your chance to own a one of a kind collection of three of the greatest contributors to film history! Please see all pictures for additional cosmetic details. Additional pictures available upon request.

*All measurements are approximates.